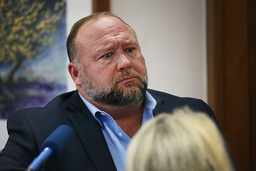 Conspiracy theorist Alex Jones attempts to answer questions about his emails asked by Mark Bankston, lawyer for Neil Heslin and Scarlett Lewis, during trial at the Travis County Courthouse in Austin, Wednesday Aug. 3, 2022. Jones testified Wednesday that he now understands it was irresponsible of him to declare the Sandy Hook Elementary School massacre a hoax and that he now believes it was “100% real." (Briana Sanchez/Austin American-Statesman via AP, Pool) TXAUS201