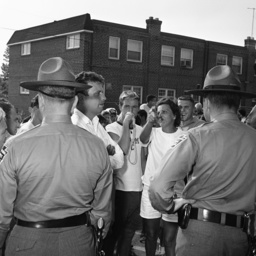 James Van Dyke, left, a University of Pennsylvania professor, stands with arms folded and lips compressed as he is attacked by a women at Folcroft, Pa., Aug/ 30, 1963, during demonstrations against a black family moving into the all-white neighborhood. A young man, dangling a replica of a hangman?s noose, stands in center as two state police troopers watch the scene. Van Dyke later was taken away ?for his own protection.? Van Dyke said he? came here as an individual to protest this kind of hate.? (AP Photo)