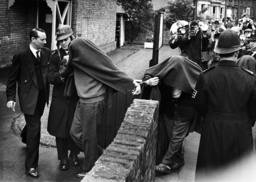 Three hooded men are escorted into a special court in Linslade, Buckinghamshire, England, August 16, 1963, shortly before three men and two women were charged in connection with last week's big mail train robbery. They were ordered to be held until August 24 while the nationwide hunt for the cash and confederates continues. Linslade is about four miles from Cheddington where a gang of bandits ambushed the night mail train from Glasgow to London on August 8, 1963, and got away with Pound 2,5 million in cash. The amount recovered so far is Pound 141.000. (AP PHOTO)