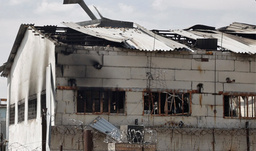 In this photo taken from video a view of a destroyed barrack at a prison in Olenivka, in an area controlled by Russian-backed separatist forces, eastern Ukraine, Friday, July 29, 2022. Russia and Ukraine accused each other Friday of shelling a prison in a separatist region of eastern Ukraine, an attack that reportedly killed dozens of Ukrainian military prisoners who were captured after the fall of a southern port city of Mariupol in May. (AP Photo) XDL107