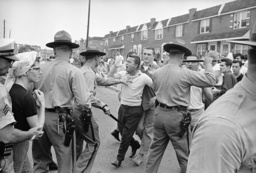 Police block men trying to cross street in Folcroft, Pennsylvania on August 30, 1963, a Philadelphia suburb, today as several hundred persons demonstrated against an African American family moving into an all-white neighborhood. Eggs and rocks were thrown and several persons arrested. Police use riot sticks in effort to halt demonstrators. Police sergeant at left holds back a woman by her elbow. Type of homes in the neighborhood is shown in background. The house in which the African American family wants to move was damaged during the night. (AP Photo)